A three-day exhibition beginning here on Friday will highlight the symbiosis of Indian traditions, such as meditation and music, with science.

The SandHI (Science-Heritage Interface) exhibition organised by the IIT-Kharagpur at ICCR here, is a showcase of the institute's SandHI initiative which integrates science with heritage and attempts to apply them in the 21st century.

Around 16 projects that are being implemented under the initiative, including those in Varanasi, Kolkata and coastal Odisha, will be on display.

"SandHI takes a look at Indian traditions through the lens of science and aims to improve the science," Joy Sen, of the department of architecture and regional planning, IIT-Kharagpur said here, adding the beneficiaries of the exhibition are over 500 students from 10 city schools.

Among the exhibits is the patron project 'Varanasi', a multi-dimensional exploratory study of the ancient Hindu holy city.

Sen said contemporary ideas are being integrated with cultural elements for tourism revival, city planning, creative economy and other ventures by involving locals and municipal authorities.

Similarly, in Kumartuli, the potters' quarters in Kolkata, students and faculty members are working on heritage tourism by re-exploring the application and range of terracotta technology as a building material in contemporary industry.

"For those interested in music, we will highlight the relation between language, music and cognition, the emotive aspects of ragas and bandishes by bringing in signal processing engineers, computer scientists, musicians and musicologists," Sen said.

The initiative has been funded by the ministry of human resource development and involves various stakeholders in academia, industry and governance across India. 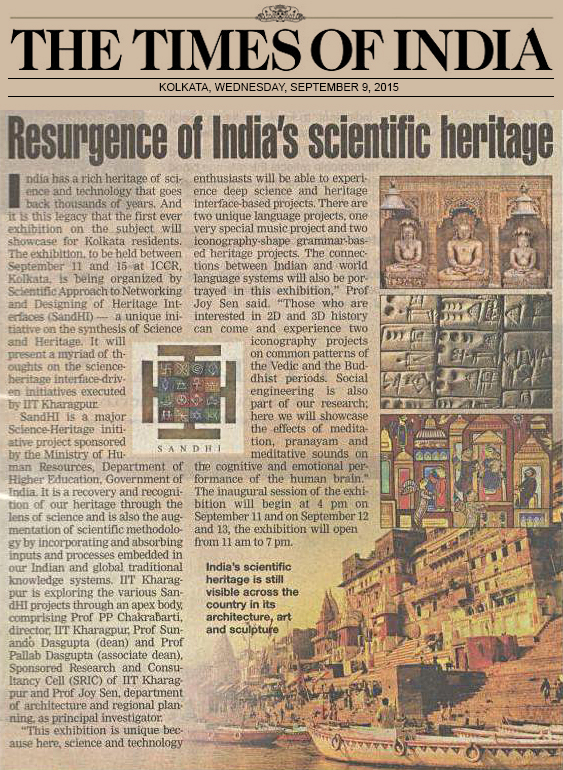