IIT Kharagpur ties up with MIT, others for cultural research

"Most of the educational curriculum taught to engineering students is not relevant in the Indian context. The idea behind the research and these initiatives is to make the current curriculum more Oriental," said Joy Sen, head of department, Ranbir and Chitra Gupta School of Infrastructure Design and Management at IIT Kharagpur. more

A three-day exhibition beginning here on Friday will highlight the symbiosis of Indian traditions, such as meditation and music, with science. The SandHI (Science-Heritage Interface) exhibition organised by the IIT-Kharagpur at ICCR here, is a showcase of the institute's SandHI initiative which integrates science with heritage and attempts to apply them in the 21st century. Around 16 projects that are being implemented under the initiative, including those in Varanasi, Kolkata and coastal Odisha, will be on display. "SandHI takes a look at Indian traditions through the lens of science and aims to improve the science," Joy Sen, of the department of architecture and regional planning, IIT-Kharagpur said here, adding the beneficiaries of the exhibition are over 500 students from 10 city schools.more

Joy Sen and Arunendu Banerjee cited the words of great thinkers and scientists and narrated incidents that marry heritage and science, two apparently contrasting fields, at Talk on Science and Heritage at Ramdulari Park, held as part of the CIMA Awards Show, presented by Reliance Industries and powered by YES Bank, in association with The Telegraph.
"Science helps us see our heritage in a new light. I move with both," Sen said as he spoke of various exhibitions and projects involving IIT-Kharagpur that seek to bring science and heritage together. "The mantras of Sama Veda are very scientific and yet they are such an integral part of heritage."
The professor of architecture and regional planning and head of the department at Ranbir and Chitra Gupta School of Infrastructure Design and Management pointed out how Vivekananda encouraged debate at Belur Math as he wanted his proteges to get over their obsession with the past and look beyond accepted ideas. "Unless we stop obsessing about the past we cannot appreciate new things. But he did not want us to forget the past either. What Vivekananda wanted was a blend of heritage and science," said Sen.
He went on to explain how the cycle of seasons holds heritage together. "Seasonal change is a part of science but with each season we celebrate various festivals and traditions. That again is heritage. Many identify seasons with the heritage it encompasses (Makar Sankranti, Poush Sankranti). Had there been just one season, we would not have got a chance to celebrate so many festivals. So what is science in one language is tradition and heritage in another," said Sen.
From popular analogy (intuitions and ancient wisdom) with a scientific basis to involution, evolution and iconography, Sen had the audience engrossed with his arguments and inferences. He quoted from historical and religious texts and even scientific theories to fuse science and heritage, backing his talk with a visual presentation and some tidbits from personal life. more

Brainstorm for a better Calcutta

Sound Square, held at The Gateway Hotel near the Ruby roundabout on the Bypass, will discuss over six sessions ways and means to turn things around. It brings academics, government officials, architects and students to discuss the problems of urban planning and offer solutions.
An action plan for the development of Calcutta, prepared by the department of architecture at IIT Kharagpur, will be released on Friday. Rakhi Sarkar, managing trustee of KMOMA, stressed the need for futuristic planning. “The old has to be reinvented. The new must be created with at least the next 200 years in mind. For this, we need systematic long-term planning involving issues of ecology, visions of growth and pristine beauty,” said Sarkar, also the chairperson of the ICC’s Calcutta Foundation.
The original capital of British India, Calcutta degenerated into a crumbling city after Independence. Open space disappeared, the majestic buildings decayed, ugly polythene stalls ruined the promenades and the concrete jungle ran over a beautiful city.
Sarkar said KMOMA got involved in organising the symposium “as part of its humble aim to restructure Calcutta”.
“What is required is a model that enhances growth without disturbing beauty, serenity and natural balance,” she added.
Partha Pratim Chakraborty, the director of IIT Kharagpur who is also a professor in the department of computer science and engineering, stressed the need for sound planning to blend the city’s rich heritage with modernity. He said technology should be used to improve the lives of the poor, which in turn would improve the urban space. more

Even so, there's one other reason for IITs to look beyond conventional subjects: to balance development of both sides of the brain. Music, art, intuitive thought or pre-mature meditative/rapturous states are features of the right side of the brain, which can help balance out aspects of engineering streams that are associated with the left side, said Joy Sen of IIT-Kharagpur, who is the principal investigator of Sandhi, a project on the interface between science and heritage, which has been introduced at the institute. "I do believe non-engineering inputs will balance their left-brain strengths with the right. This should enable more creative and balanced thinking of both engineering and real-world problems," said Prabir Kumar Jha, global chief people officer (designate) at Cipla. Subjects such as graphic design, visual communication and design semantics are already taught to students at IIT-Kharagpur.more

Another parkomat to decongest Dalhousie

Apart from an improvement in Kumartuli's infrastructure, IIT-Kharagpur plans to use technology to enable world-class artworks fetch better price. "Made-in-China idols are flooding the market. The artisans could loose out if they do not get the aid of technology. We are looking at whether 3D printing technology and online sales platform can be created for the creations," IIT-Kgp director Partha Pratim Chakraborty said.
"From preparing the clay to firing it, technology can be of immense help. A similar initiative will be taken in College Street to ensure that the repository of knowledge survives when books are increasingly being purchased over the internet," IIT-Kgp associate professor Joy Sen added. more

The pavements on both sides of Rashbehari Avenue are soon going to get a new look. The architecture department of the Indian Institute of Technology Kharagpur has taken it upon itself to give an international facelift to four stretches of Gariahat.
The project is sponsored by the Union ministry of human resources development and is being supported by the state urban development department. Interestingly, while hawkers have generally been considered encroachers in Kolkata, this is perhaps the first time when a state-backed project aims at formalizing the status of hawkers and talks about a creative economy around Gariahat.
"The hawkers of Gariahat are a post 1947 phenomenon. They exist alongside regular shop owners on the same stretch. They have been part of the city's economy for long despite efforts to evict them, some of these efforts being state sponsored. Now, both the Centre and state have decided to accept the existence of hawkers as a community that generates its own income and need to be formalized," said Joy Sen, a faculty of the architecture department of the institute. The idea is to make Gariahat a habitable and serviceable zone and turn the hub of shoppers into a tourist attraction. more

The promise of making Calcutta a better place can only be realised through active participation and contribution of the inhabitants, speakers at a symposium on urban development stressed on Friday.
The state government pleaded that the challenges of a metropolis bursting at the seams are vast and appealed to academicans, architects and students to come forward and help reshape the city.
“We as the government are so busy with day-to-day tasks that sometimes it becomes difficult to chart a long-term vision for the city. We need the people to come forward with ideas and research and work jointly with us,” Debashis Sen, principal secretary in the state urban development department, said on Friday at the valedictory session of Sound Square, a two-day symposium organised by the Kolkata Museum of Modern Art (KMOMA)…
Some felt that a few of the changes were beginning to show. Raghu Mody, chairman of Rasoi Group, said: “Many friends and relatives who have visited the city recently have commented on the beautification of Calcutta and the easing of traffic woes.”
Students of IIT Kharagpur handed over an action plan report for the city to Debashis Sen. The report will “help the government develop the city”, Sen said.
“I had requested minister Firhad Hakim to let me know the list of projects undertaken by the Bengal government and he mailed me a detailed list,” said Partha Pratim Chakrabarti, director, IIT Kharagpur. “We have handed over an action plan to the ministry, which is the first step towards engaging with the government.” more 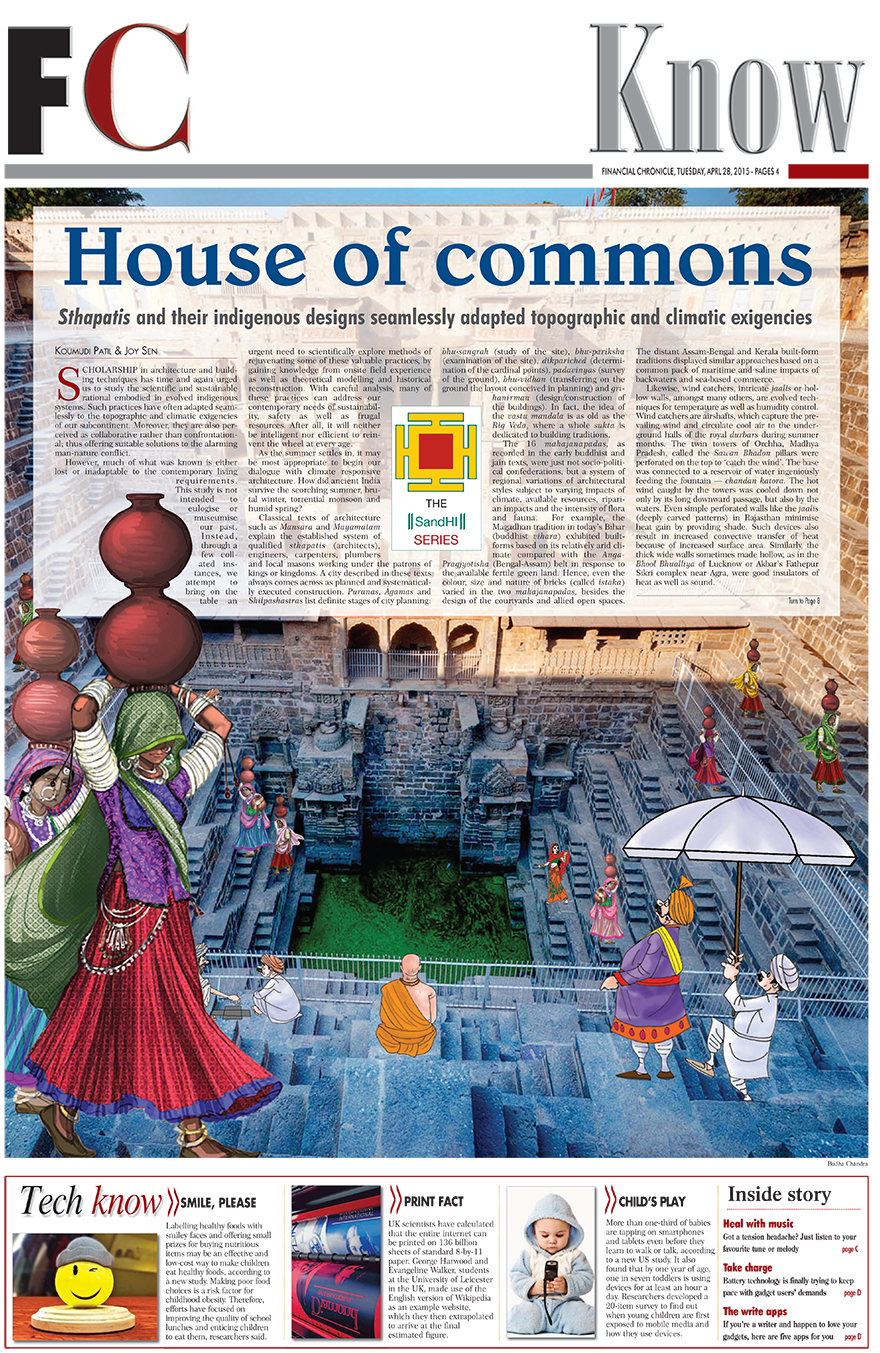 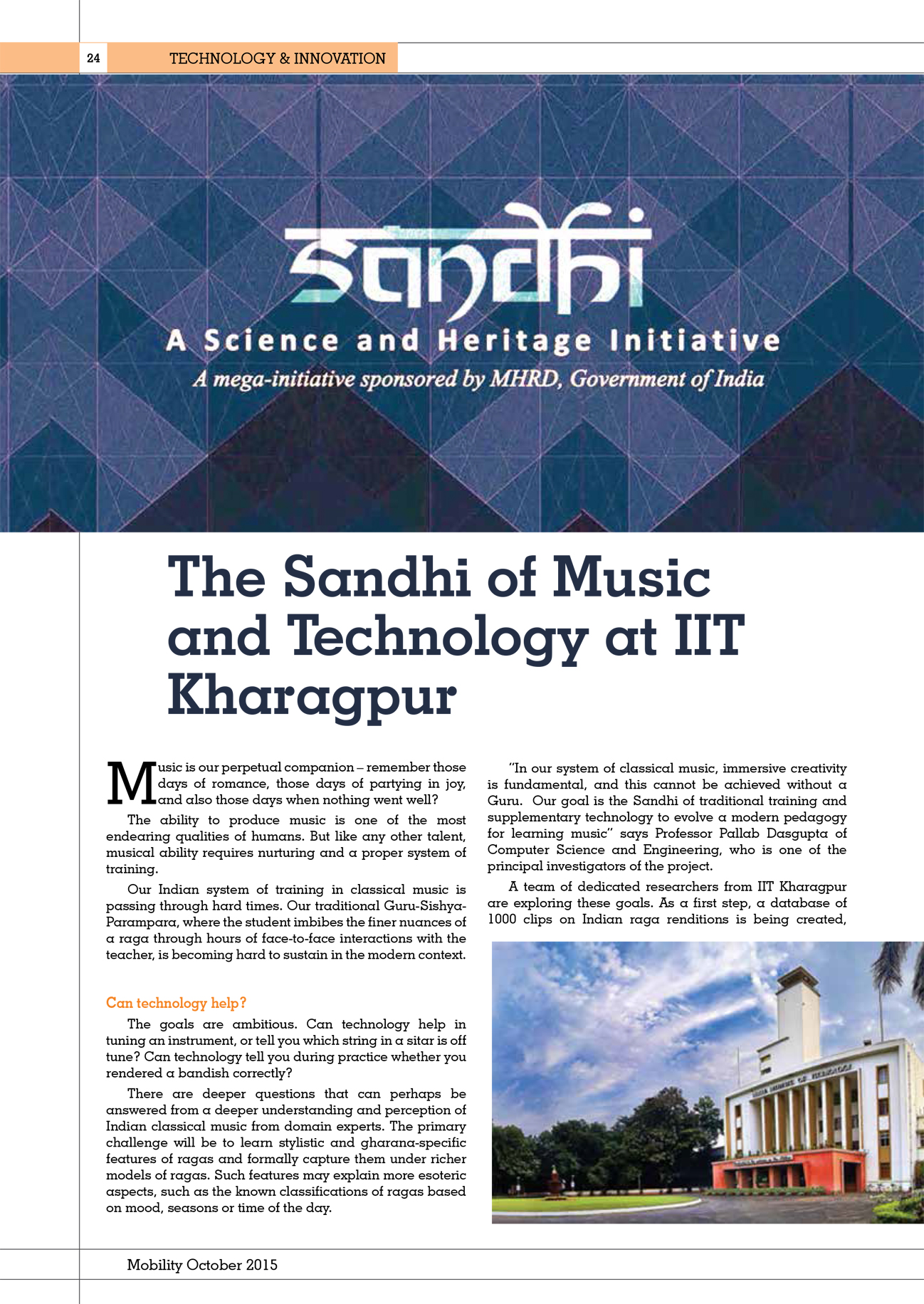 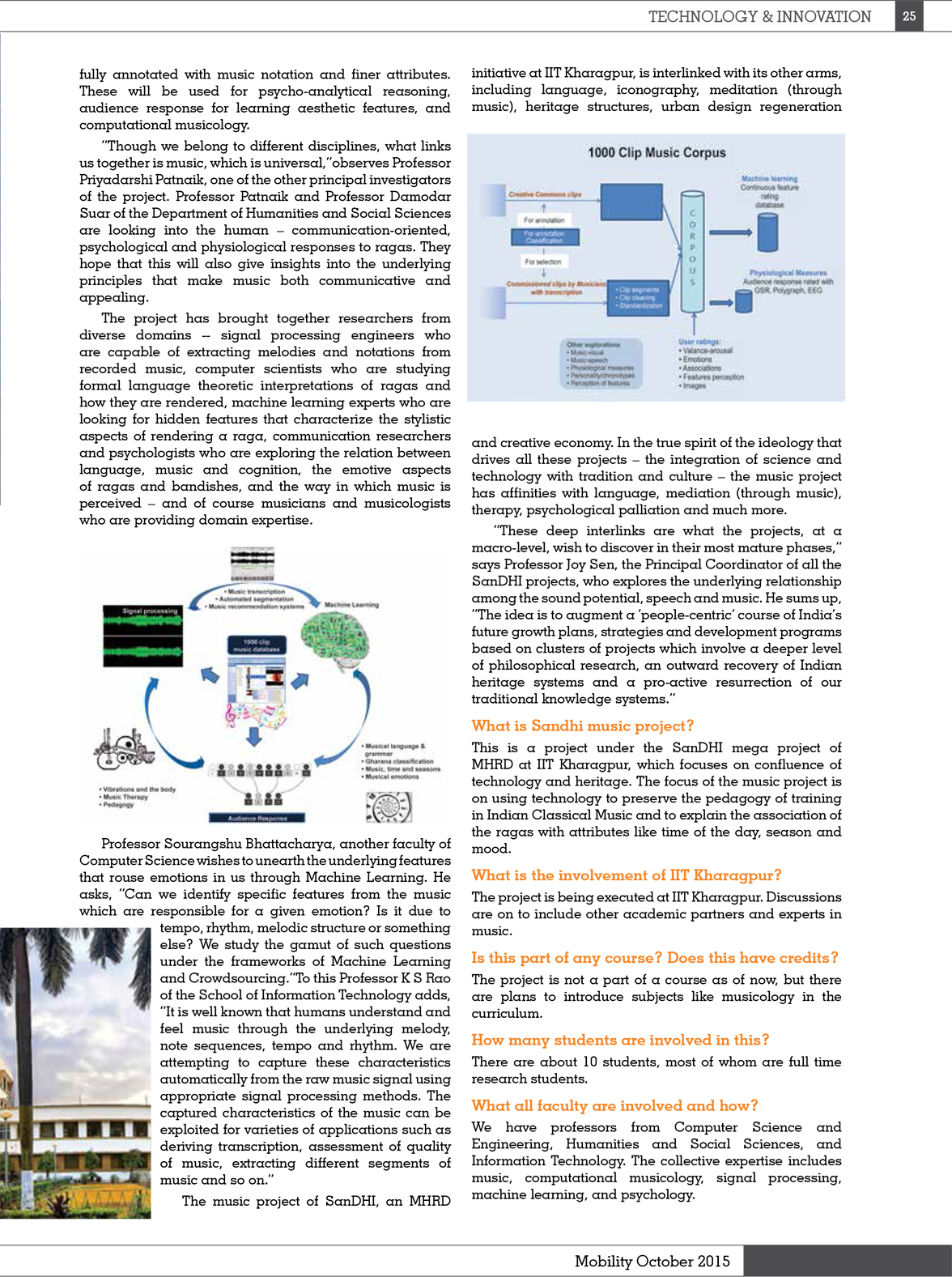 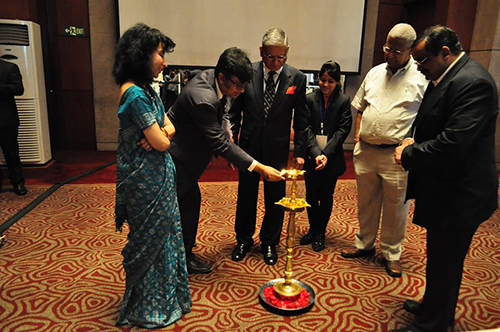 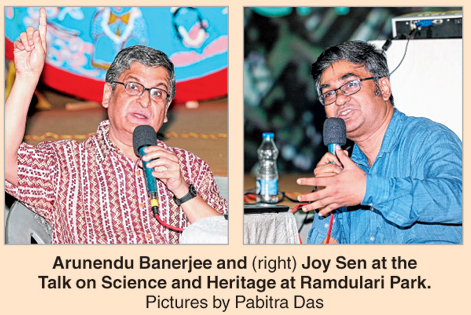 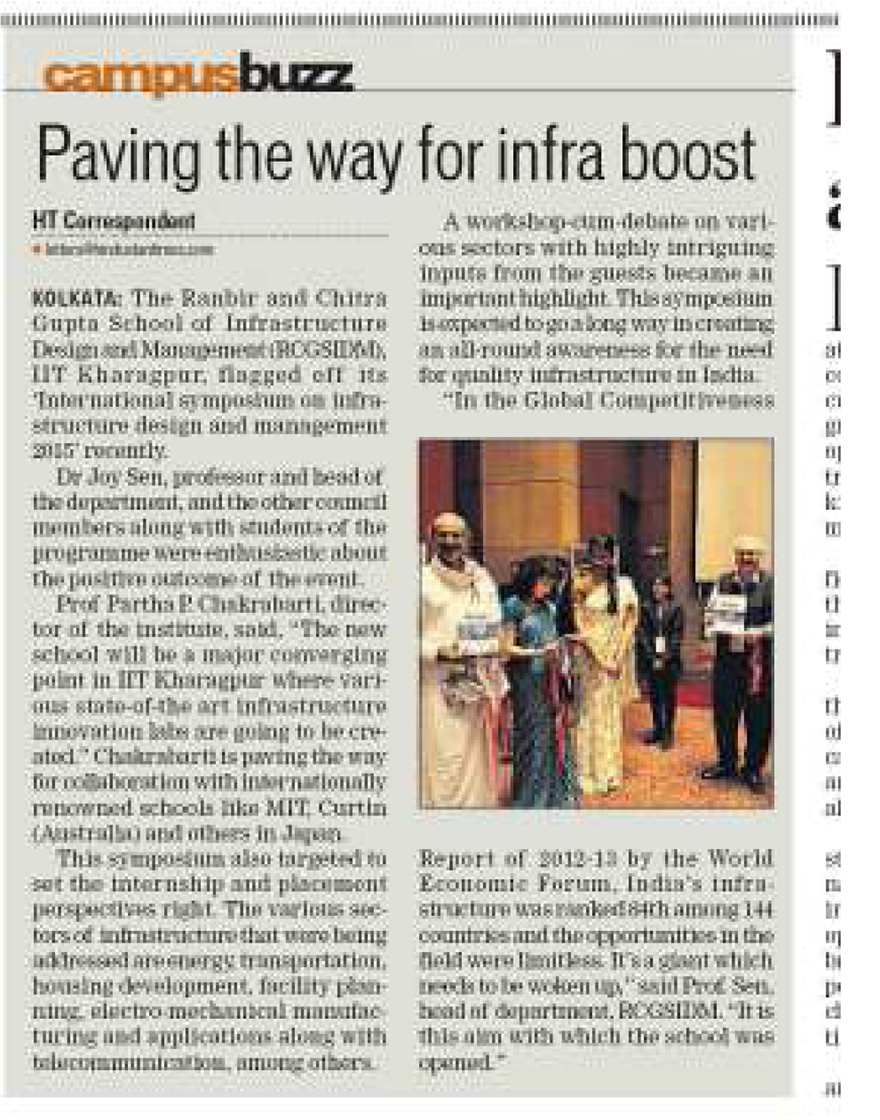